Since 1986: The legend of Phantom of the Opera 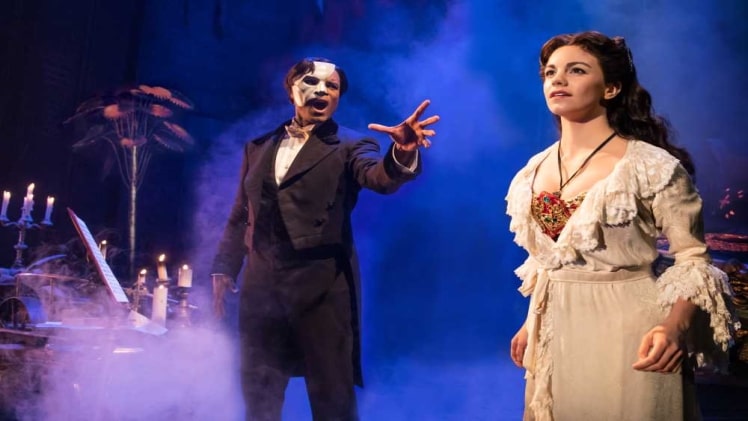 Phantom of the Opera is the West End’s most haunting love story and has been playing since 1986. Andrew Lloyd Webber’s hit show is one of the most successful theatrical performances of all time, having played to more than 140 million people in 35 countries. Financially, the show has grossed in excess of $6 billion, highlighting just how popular Phantom of the Opera has been over the years. If you haven’t yet seen this scintillating drama, this summer is the perfect time to reserve your seats at Her Majesty’s Theatre, London.

Phantom of the Opera is based on Gaston Leroux’s gothic novel of the same name. Leroux published Phantom of the Opera in 1910, and the novel is based on a phantom’s life under the stage at the Paris Opera House. The story tells the underground tale of a shady phantom, living life in stark contrast to the splendour of the distinguished guests that regularly take in shows at the opulent opera house. The phantom is ashamed of his physical appearance and haunts the backstage and public areas of the opera house. When he falls in love with a young singer called Christine Daae, the phantom moulds her into the star of the show. Besotted, the phantom requests Christine to spend eternity under the stage with him, but she rejects his advances, and the stage is set for revenge as she is rescued by her lover.

Since debuting, Andrew Lloyd Webber’s Phantom of the Opera has won seventy major theatre awards, notably seven Tonys on Broadway and three Olivier awards on the West End. In 2016, Phantom of the Opera won the Olivier Audience Award, as voted for by the general public. The show has surpassed all expectations since debuting at Her Majesty’s Theatre on October 9th, 1986. The show is currently playing in London, New York, Budapest, and Stockholm and regularly tours the United States. Although Andrew Lloyd Webber has composed 21 musicals, there’s no doubt that Phantom of the Opera is one of his finest creations.

Phantom of the Opera in numbers

As a musical, Phantom of the Opera has achieved incredible milestones since debuting in 1986. It has played for more than thirty years, totalling more than 12,000 performances at Her Majesty’s Theatre in London. It has also been played in fifteen different languages and has played in 166 cities in 35 countries. In other words, it is the epitome of a global sensation! The box office revenues that Phantom of the Opera has achieved are higher than any other stage play or film in history, defeating the likes of Titanic, Star Wars, and ET. Once released, the original cast recording was the first in British history to enter at number one on the charts, and in the years since, the album has racked up more than 40 million sales.

If you haven’t yet enjoyed Andrew Lloyd Webber’s classic production, now is the perfect time to book your tickets to see Phantom of the Opera. Playing at the opulent Her Majesty’s Theatre in London, you can see this stunning, historical performance at one of the UK’s most impressive venues. So, if you’re looking to add a dose of culture to your summer holiday, reserve your tickets today and look forward to seeing one of the world’s most famous musicals. Once you’ve got a date in the diary for Phantom of the Opera, discover other London musicals that you can enjoy with your family and friends this summer.