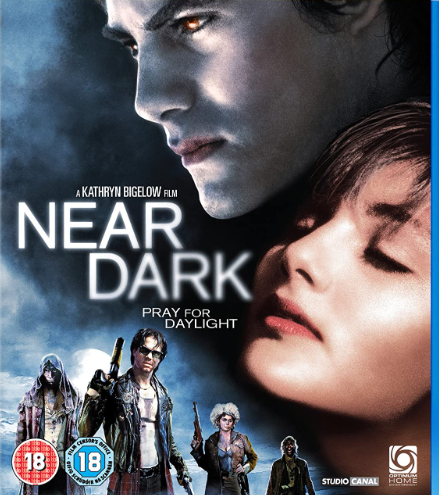 Kathryn Bigelow’s cult vampire movie Near Dark, for all its faults, is a consistently gripping and deeply moving work of art.

In the movie, the young stud Caleb (Adrian Pasdar) goes out on the pull at midnight and meets the gorgeous young Mae (the astonishingly lovely Jenny Wright), who is looking for a ride home.

What Caleb doesn’t know, however, is that Mae harbours a dark vampiric secret and, one bite to the neck later, he moves helplessly into a new and deadly underground world of blood and lust. He must fight to return to his family, and save his own life.

It is from within this banally typical narrative structure that Bigelow draws her strangely profound tale of human weakness and suffering, a tale that is subtle enough to work on one semi-subconsciously for much of the movie’s duration.

The world of Near Dark is one of masculine power and self-assertion, a world in which bullying is both institutionalised and standardized on the street, and in which cheap and momentary thrills are the most that one can hope for.

The arrival of beautiful Mae into Caleb’s life promises to open the door into a new and heightened mode of living, but his experience of the night-time vampire community quickly disabuses him of this fantasy: the metaphysical realm is as patriarchal, manipulative and disgusting as the human realm. You can get the movie at 123 Movies.

This is so because what remains constant between both realms are human beings, with their characters, actions and aspirations.

Bigelow makes endless and endlessly effective use of long-shot, allowing her camera to dwell on the vast and breathtaking southwest American prairies, baking under the midday sun or brushed gently by the midnight mists.

Once Upon a Time in the West

Mae tells Caleb that she comes from Sweetwater, a name which rings in the association with Sergio Leone’s cowboy classic Once Upon a Time in the West, another movie the luxurious landscapes and skyscapes of which stick most firmly in the mind.

It is against this lyrical and overwhelming backdrop, in Near Dark, that the human drama plays itself out, and reveals itself to be, by comparison, small and pathetic.

The characters in this movie, human or vampire, are weak and scared, and human evil stems specifically from this situation. Afraid of the outer world, people lash out violently against it, and at each other.

We watch the people in Near Dark with both love and pity – with love, because the weird assortment of misfits in the movie are moving in their typicality; with pity, because of their entrapment within situation, their helplessness in the face of fate, of the unknown.

Even the rugged and violent Severen (played with malicious glee by Bill Paxton) elicits our sympathy, precisely because Bigelow’s direction reveals so clearly that he is especially deluded, that he is violent to others in order to escape from the necessity of having to confront his own self.

What is strange about Near Dark is that it is a vampire movie, and a tremendously effective one, but it also works miraculously well as a revelation of a part of the human condition, a diagnosis of human weakness and fallibility.

The mournful synthesiser soundtrack is exactly appropriate to the movie’s content: it is inescapably and tear-inducingly beautiful, specifically because, at its core, lies an acknowledgment of the inevitability, depth and hatefulness of human pain.