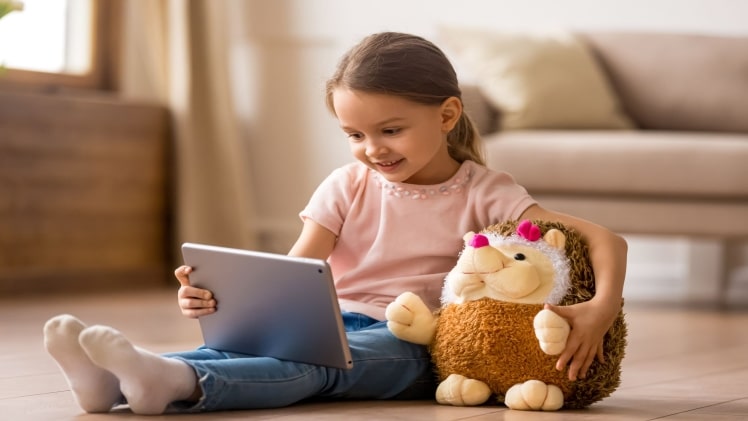 Everywhere you turn, you see it. It’s probably even happening with your kid. No matter where you look, it’s getting harder to find a device-free child. Whether they’re playing a game or chatting online with friends, most kids have their face in a screen.

As a parent, you may be worried your child is letting the real world pass them by. Limiting their screen time is one way to pull them out of cyber-land. How do you do it without coming off as the Wicked Queen or the Evil King, though? Don’t worry, it is possible — try these strategies to wean your kids off their devices without too much fussing.

Discuss Boundaries with Your Child

Think back to when you were a kid. It was probably pretty frustrating when your parents made rules and didn’t ask for your input. Granted, your getting any say-so may have been unusual at the time, but things are a little different now. Your kid is more likely to stick with any screen-time limits if you include them in your decision making.

Of course, you’re in charge of how much screen time your child can have. Still, letting them have a voice in deciding on when they can have that time can be beneficial. Rather than restricting all screen time to the weekend, consider allowing short sessions after they finish their homework. Your child will feel less controlled, and you’re still limiting daily screen time without looking unreasonable.

Limit the Screen Itself

Even if you have a healthy conversation with your kid, they might try to sneak in some illicit screen time time here and there. There’s a way you can head their attempts off at the pass, however. Consider a phone with remote screen time management, such as Troomi.

These types of phones have operating software that you control from your phone. For example, you can block apps on the phone during the school day. It’s an easy way to remove the screen-time temptation when your kid should be paying attention in math class. Plus, if your child knows the limits, you’ll probably get fewer requests for screen-time permission.

Getting enough sleep is a big deal for kids. Unfortunately, there’s a growing mountain of research that says screen time is cutting into those precious Zzzs. For fewer cranky mornings and less obvious bags under their eyes, consider making your kid’s bedroom a screen-free zone. The more well-rested they are, the less irked they’ll likely be about screen limits.

Removing video games from their bedroom ensures they won’t be awake trying to reach the next level at 2 a.m. Take out the computer, and they won’t lose sleep by lingering in a group chat until the wee hours. If they use their phone as an alarm clock, invest in an old-school, inexpensive replacement. Kids need sleep more than they need to answer text messages that might come in overnight.

Join Them for Screen-Free Intervals

Preplan some no-screen time for your entire family. It’s a great way to pull everyone back into the real world without making your kid feel singled out. Look no further than dinnertime for the perfect opportunity.

Let everyone know the dining table is a screen-free zone. When it’s time to sit down for dinner, no phones or computers are allowed. Everyone puts their device somewhere else; consider using one big basket that can hold phones and tablets. Without screens, you’ll enjoy catching up over your meatloaf or pasta primavera.

It sounds easy to simply nix screen time for your kids. Setting the restriction without suggesting an alternative, though, can seem harsh. So when you lay down the device-limit law, be prepared to offer up a few different activities. If you can participate in these other options, so much the better.

Get your kid involved in mealtimes by asking them to read recipes or measure ingredients. Plan a couple of family game nights each week. Give Monopoly or Trivial Pursuit a shot or enjoy the belly laughs from a game of charades! If everyone is too busy cracking up, your child won’t even notice they’ve left their device somewhere else.

Let your kids know screen time is a privilege, not a right. If you can, set this expectation from the very beginning. If your kid already has a device, though, that’s OK — you can start now. Create a system where they have some control over the minutes and hours they earn with their device.

Work with your child to design an age-appropriate chore list and make a schedule. Give every chore a minute amount so they know how much time they’ll receive for a job well done. You can also link earned screen time to sports or music practice or even just time spent playing outside. Even if they earn lots of screen time, let them know there will still be device-free periods.

You’re a parent, so you know one of your kid’s favorite questions is “Why?” When you limit their screen time, they’re going to ask you the same thing again. It’s a good idea to have your age-appropriate answer at the ready.

If your child is little, keep your explanations simple. Too much screen time can hurt their eyes or make them super tired. Older children need more detailed explanations. Discuss the dangers of extensive internet use, such as increased anxiety or exposure to too much violence.

Be honest about your reasons and make sure your kids understand why you made your decision. If you give them a clear explanation, they’re less likely to think you’re being unfair.

Fighting against the growing screen culture can feel like an uphill battle. It’s a struggle worth taking on, though. Limiting your child’s screen time frees them up for other activities, and it gives you more time to spend together as well. With these tactics, you may find that your kid will happily put down their device in favor of better alternatives.